Blogging From Beyond the Great Firewall

Four “Must See” Parks in Tianjin

Parks are a huge part of Chinese culture and they’re used for a massive range of activities. Year-round you’ll see people playing badminton, practicing tai chi, playing musical instruments, boating, flying kites, painting, line-dancing, as well as the ‘usual’ activities of walking, running and playing games. With a population of around 14 million, Tianjin is China’s fourth largest city – it can be fairly hectic, so it’s no wonder the locals appreciate the great network of parks. When you need to escape the hustle and bustle, there’s a bunch of great parks to choose from. Here’s a list of what I consider to be four “must see” parks in Tianjin.

This is the biggest park in Tianjin. It’s situated near the popular expat area of Ao Cheng, so it’s not as central as other parks, but it’s well worth the trip away from downtown. There are loads of winding paths and islands to explore in this truly massive park. You’ll see some ducks, plenty of boats in the summer, and even a Ferris wheel (which is part of a small amusement park). The small zoo has cheap entry and is popular with young and old, and there’s a great view of Tianjin’s TV tower, which makes for photogenic backdrop.

This is a gorgeous little park tucked away behind Ao Cheng, and as its name suggests, was once a mountain of trash (although it’s really more of a small hill). However, don’t let this interesting fact deter you from visiting this hidden gem. There’s so much on offer here including a running/walking track, several small restaurants, boating in summer, and a man-made snow hill in Winter that you can tube down. What more could you ask for in a park?

Like most big cities in China, Tianjin has its own people’s park. Here you’ll find a variety of fun areas for the young ones (slides and sandboxes), as well as a ton of nice areas for adults to relax and enjoy a sunny day. The west gate is worth a look to take a picture or two and there’s even a couple of birdcages for you Ornithologists out there. This park has a couple of interesting facts: once owned by a salt merchant, it was donated to the state in the mid 1900’s, and it is the only park that Chairman Mao did calligraphy for!

Here, as with many of the other parks in the city, you’ll find loads of paths winding around water features and plenty of beautiful trees and plants. There’s even a section featuring tropical plants and flowers. Interestingly, this was apparently the first park in Tianjin to stop charging visitors for entry (now almost all parks in Tianjin are free to enter). The West gate is the place to head for drinks, snacks and toys you convince yourself you totally need (but you know you really don’t).  It’s also one of the premier spots in Tianjin to enjoy roast leg of lamb in the summer. Cooked over an open spit, and served with an ice-cold Tsingtao beer, there’s no better way to enjoy an evening in China!

Parks in Tianjin are great all year, but spring is by far the prettiest time to visit – there are gorgeous water lilies and colorful flowers blooming everywhere. All parks listed here are free to enter and open 24-hours a day. They can be crowded on weekends, so be prepared to jostle for space at times, or try to work out which times are a little less busy, like early morning . Most of these parks are easy to get to by bus or subway (and then a bit of walking), or if you’d prefer, show (or tell!) a taxi driver the Chinese name and you’ll be there in no time!

Where are your favorite parks in Tianjin? Tell us below! 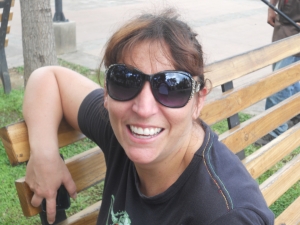 Penny de Vine is a thirty-something Australian freelance writer with a love for travel and trying anything new! You can follow her on Twitter or Facebook.