Blogging From Beyond the Great Firewall

The Nasty Truth About Teaching ESL in China

Anyone who spends ten minutes reading online reviews of schools in China knows this: teaching English in China is a horrible, miserable experience you wouldn’t wish on anyone.

But why is it when people come here and actually speak to expats who have been teaching for a while, they hear a different story? Their friends say: it’s fun, they love their school, and they plan on staying two or three more years.

The reason is simple: selection bias. Wikipedia says selection bias occurs when, “…groups or data for analysis in such a way that proper randomization is not achieved, thereby ensuring that the sample obtained is not representative of the population intended to be analyzed.”

So what is it about the people who write these horrid reviews of ESL schools that skews the sample? Generally speaking, those who gather on ESL threads to bash their school are negative people who’ve developed a herd mentality. They say “misery loves company,” and what better way to increase your feeling of self-worth than to join into a frenzied mob of disgruntled teachers with an ax to grind?

Their posts often start like this: “I worked at Blah Blah Blah English School for three years and boy they were a bunch of….”.

Riiiiight. So, this place was so incredibly terrible you stayed for how many years?

Many people forget an important fact: You’ll have problems at your job in China….just like you did at your job at home! There’s no such thing as a “perfect job,” and being able to cope with difficulties in your workplace is a part of life. Learning how to deal with these problems means you’re not lying when you write, “Works effectively in cross-cultural settings.” on your CV.

There’s also a subset of people in China who “can’t hack it” in their home country, and are forced to stay in a foreign country for much longer than they’d like. They’ll tell you how much they hate the food, the people, their school, etc. If you talk to this person long enough, you’ll probably also discover they think their home country is rubbish, too. These people have no business teaching, especially teaching children!

Okay, okay – I’ll get off my soapbox now! Do you want to know the truth about teaching ESL in China?

I know it can be pretty shocking to hear, but that’s the nasty truth! The people who teach overseas (and stay because they love it) generally don’t spend their hours trolling ESL message boards. Ya’ know, because they’re outside…enjoying their life. Maybe eating dumplings, or climbing a mountain, or writing in their journal.

Have you spent a year or more teaching overseas? We’d love to hear your thoughts and stories! If you have incredible travel photos, please send them our way!

Also, if you’d like to learn more about how to become a guest blogger, write us at info@eslsuite.com with the phrase “Guest Blogger” in the SUBJECT LINE. 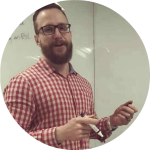 Christopher came to Tianjin via Buffalo, New York, and Los Angeles. He’s lived in China since 2009, and has traveled to over 20 countries on six continents. Christopher has been in teaching and recruiting for over five years – he’s the co-founder of ESL Suite, a husband, and father to two strapping little boys. If he’s not at work, you’ll find him in the gym, or narrowly dodging oncoming traffic on his fixed-gear bicycle.

9 thoughts on “The Nasty Truth About Teaching ESL in China”